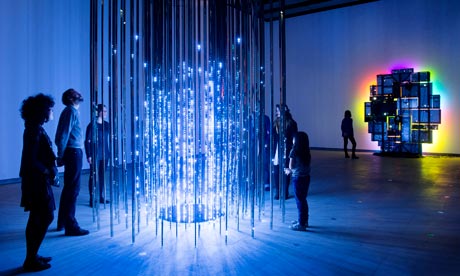 Leo Villarreal’s Cylinder II is the opening work at the Hayward’s Light Show. It’s a very good exhibition, with a few high points; Villarreal’s piece was one of mine.

The notes on the piece describes it as featuring “light and movement” composed by “complex computer programming.”

This particular word – complex – frequently annoys me when it comes to technologically manifested art. It annoys me because the craft of the piece is its assembly – both its manufacture, in light and metal, and its programming. But to make a virtue of its complexity… is much like describing Rembrandt as painting in “challenging oil paints”.

It’s one thing to describe the work as complex. But to describe the process the artist took as complex is something else; many artistic processes are complex, but few deserve that complexity highlighting. And in this case… the programming is intricate, and has been executed carefully, but it struck me as just another piece of electronically produced art.

Make no mistake: it’s entirely beautiful. But something about highlighting the complexity of the process when it’s fairly typical of that process rubs up against me; I wonder if it’s the surprise or alienness of technologically manifested work.

Of course, Villarreal’s piece isn’t really about how hard the programming is at all; it’s about how light interacts with a space, how patterns emerge, how we perceive. The programme notes go onto to discuss that, and they do so much better.

It’s a lovely show, though. Not much of it is bad, but the best parts – Villarreal, Eliasson, McCall, Flavin – are wonderful.

(On an entirely separate note: an exhibition in which the ability of the public to read “NO PHOTOGRAPHY” signs was worse than ever. The signs were particularly illegible in the darkened rooms, which rather spoiled my favourite piece of the exhibition – Anthony McCall’s You and I, Horizontal; an exhibit that makes a virtue of carefully shaped light through darkness is somewhat impeded by camera flashes. Leave them at home, folks; it’s art, not a sideshow.)