At the end of the course I’ve taught for the past three years, I offer some more general advice for existing-as-a-person to my students (who are studying “Digital Management”, and I am teaching them about technology.

I put up a single slide with the word

which is advice you will have heard from countless Successful Entrepreneurs and Busy Executives, who tell you the importance of books, and then tell you all about these popular cognitive-science books they’ve read, or Books About Business.

I then replace it with this slide:

Read fiction. I don’t mean “read sf to have ideas about the future.” I mean “read any form of fiction, genre or no”. Fiction allows us to have other ideas, live other lives, see other perspectives. It allows us to escape and re-consider the world from outside ourselves. It allows us to think at lengths and timescales that we may not from day-to-day. It is a shortcut to containing multitudes; to other minds.

I was reading the The Atlantic writing about how they are publishing more fiction, and that put me onto this excellent quotation by Alice Munro. I like it a lot because it conveys to people for whom fiction is a linear thing, a narrative that starts and plot happens and then stops, the other thing that happens when you exist inside fiction, and why you might reread books. I will be using in future:

A story is not like a road to follow … it’s more like a house. You go inside and stay there for a while, wandering back and forth and settling where you like and discovering how the room and corridors relate to each other, how the world outside is altered by being viewed from these windows. And you, the visitor, the reader, are altered as well by being in this enclosed space, whether it is ample and easy or full of crooked turns, or sparsely or opulently furnished. You can go back again and again, and the house, the story, always contains more than you saw the last time. It also has a sturdy sense of itself of being built out of its own necessity, not just to shelter or beguile you.

(From her introduction to her own Selected Stories, 1996.)

That means my thought process for making things is often a bit like this:

As time has gone on, my difficulty threshold has gone down: if it’s going to take more than an evening’s work, I’m not really sure I can be bothered. Especially if it requires hosting and maintenance. But sometimes, the perfect set of conditions arrive, and I need to make some nonsense.

This is how I ended up writing a somewhat silly SparkAR filter in an afternoon.

SparkAr is Facebook’s platform for making “augmented reality” effects for Instagram and Facebook camera. That translates into “realtime 2D/3D image manipulation”, rather than anything remarkable involving magic glasses. For the time being, anyhow.

Effects might work in 2D, through pixel processing or compositing, or by using 3D assets and technologies like head- and gesture-tracking to map that 3D into the scene. Some “effects” are like filters. They stylize and alter an image, much like the photo filters we know and love, and you might want to use them again and again.

Others are like jokes. They land strongly, once, and from that point on with diminishing returns. But the first point of landing is delightful.

In the popular Playstation game Metal Gear Solid from 1998, the hero, Solid Snake, sneaks around an Alaskan missile base, outgunned and outnumbered. In general, he will always do best by evading guards.

When a guard spots Snake, the guard’s attention is denoted by an instantly recognizable “alert” sound, and an exclamation mark hovering over his head. At this point, Snake must run away, or be hunted down.

The exclamation mark – and sound – have become a feature throughout the entire franchise, and gone on to be a bit of a meme.

That is all you need to know about Metal Gear Solid.

I wanted to to make a filter that recreated the effect of the alert, placing the exclamation mark above a user’s head, tracking the position of their head accurately, and – most importantly – playing that stupid sound.

In Spark this is, by most programming standards, trivial. Facebook supply many, many tutorials with the product (and, compared to the dark days of their API documentation nine or ten years ago, their new documentation standards are excellent).

I started with a template for making 3D hats, which matches a 3D object to a user’s head, and occludes any part of the the object falling ‘behind’ their head. Then I just had to lightly adjust it, replacing the hat with a flat plane that displayed a texture of the exclamation mark I’d done my best to recreate. That was half the work: putting the image in the right place.

What was more interesting was determining how the mark should pop-in, playing the iconic sound effect at the same time. The face-tracker offers lots of ways to extract the positions of facial geometry, and I spent a while tracking how far a mouth was open in order to trigger the effect. Eventually, though, I settled on the “raised eyebrows” outlet as being a much better vector for communicating surprise.

Some brief faffing in Spark’s node-based programming environment later, and now raising eyebrows triggered the brief animation of the exclamation mark popping in, and the corresponding sound effect.

Aside: I am not the biggest fan of graph/node-based coding, partly because I’m not a very spatial thinker, and partly because I’m already comfortable with the abstractions of text-based code. But this model really does make sense for code that’s functioning more like a long-running pipeline than a single imperative script. You find this idiom in game-engine scripting (notably in Unreal 4), visual effects tools, realtime graphics tools, and similar, and it is a good fit for these tools. Also: the kind of people coming to work in SparkAR will likely have experience of 3D or video tools. Increasingly, as I pointed out to a friend, “everything is VFX“, and so graph-based coding is in increasingly more places than it used to be.

I also made sure I supported tapping the screen to toggle the effect’s visibility. After all, not everyone has reliably detectable eyebrows, and sometimes, you’d like to use this imagery without having to look surprised all the time.

Finally, I added some muddy scanlines to capture the feel of 90s-era CRT rendering: a slight tint for that authentic Shadow Moses feel, coupled with rolling animation of the texture.

With this all working, I promptly submitted it for review, so I could share it with friends. 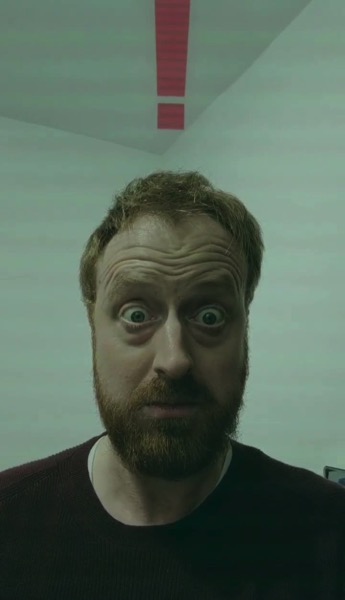 As with every single workflow where there is a definite, final submission – be it compilation, code review, or manufacture – this is exactly the point in time when I realise I wanted to make a bunch of changes.

Firstly, I felt the effect should include some textual instructions; if you haven’t been shown it by me, you might not know how it works. So I worked up adding them.

Secondly, I felt the scanlines should be optional. Whilst they’re fun, some visual jokes might be better off without them. So I wrote some Javascript to make a native option picker at the bottom of the effect, with the default being “scanlines on”.

Once version one had been approved, the point release was quickly accepted. And then I shared the filter in my story, and wondered if friends would borrow it.

(“Borrow”: the only way to share filters/effects it to use them yourself. Once they’re published, you have to use them in a story post of your own. Then, if a friend wants to “borrow” it, they can grab the filter/effect from your story featuring that effect. In short: the only way to distribute them is through enforced virality. I can even share them outside my protected account. I am fine with this; I think it’s rather smart).

When I first shared it with friends, one wrote back: “yay for fun with software“.

It’s a while since I’ve worked on a platform that’s wanted to be fun. I’ve made my own fun with software, making tools to make art or sounds, for instance. But in 2020, so much of the software I use wants me to not have fun.

I made my first bot on Twitter a long time ago, and from there, Twitter became my platform of choice for making software-based jokes.

Twitter is now very hard to make jokes on. The word ‘bot’ has come to stand for not ‘fun software toy’ but ‘bad actor from a foreign state’. The API is increasingly more restricted as a result. I’m required to regularly log in to prove an account is real. My accounts aren’t real: they’re toys, automatons, playing on the internet.

I get why these restrictions are in place. I don’t like bad actors spreading misinformation, lies, and propaganda. But I’m still allowed to be sad the the cost of that is making toys and art on the platform. (An art project I built for the artist Erica Scourti was finally turned off once API restrictions made it unviable).

Most software-managed platforms are not places you can play any more. I understand why, but I still wish that wasn’t the case.

Yes, I know Facebook, who are hardly a great example of a good actor, are getting me to popularise their platform and work on it for free. It’s a highly closed platform, and I’m sure they’ll monetise it when they work out how. I’m giving them free advertising just by writing this.

But. Largely, what I made is a stupid visual effect that neither they nor I can effectively monetise, and it’s a joke is better told than not told. In that case, let’s tell the joke.

I showed it to my friend Eliot:

Every single time I hear that sound and see it working, I laugh. Actually, sometimes I don’t: I’m busy holding a straight face with my eyebrows up, and somebody else is laughing. Either way, somebody laughs. And that’s good enough for me.

I know, intuitively, this is a not unproblematic development platform. I know it’s not really ‘free’ in the slightest. But I write this because, right now, it was a quiet delight to be allowed to make toys and play on somebody’s platform, and one of the more pleasant platforms they run (if you keep it small, private, and friendly). I’m sure they’ll mall-ify this like everything else, but for now, I’m going to enjoy the play it enables.

It’s a while since I’ve made a toy that was so immediate to build, so immediately fun for others.

Yay for fun with software.