Text In The World

After a long period underground, Ubisoft’s Splinter Cell: Conviction emerged at E3 substantially different to its previous incarnations. And whilst I, for one, am grateful for the removal of Sam Fisher’s trampy hairdo, the new feature that got me really, really excited seems to have passed with relatively little fanfare. Here it is: 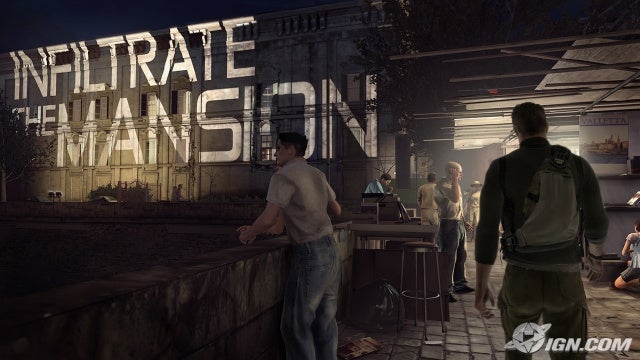 Mission objectives – or, at least, reminders thereof – written into the environment, mapped over space, appearing to the player along; subjective and stylistic, but never part of a HUD. It’s classy and striking, and not something people are playing with in games nearly enough. Prior to this, easily my favourite type design in games came from Codemasters’ GRID:

which placed text into the world as first-class 3D objects, and let the player spin and pivot the camera around it, as if to emphasise both its subjectivity and genuine 3D-ness.

But this has been a thing in movies and TV for a while, now. Here’s JJ Abrams’ Fringe: which even nails the reflections in the water. And, of course, one of the earliest points of reference for this in genuine 3D is David Fincher’s Panic Room:

which, as Ben has pointed out, owes a great debt to Saul Bass’ titles for North by Northwest: 10 comments on this entry.